Neasa spoke in the Dáil on the RTÉ Prime Time Investigates findings that the Department of Health has been secretly maintaining dossiers on children with autism who were involved in legal actions against the State. 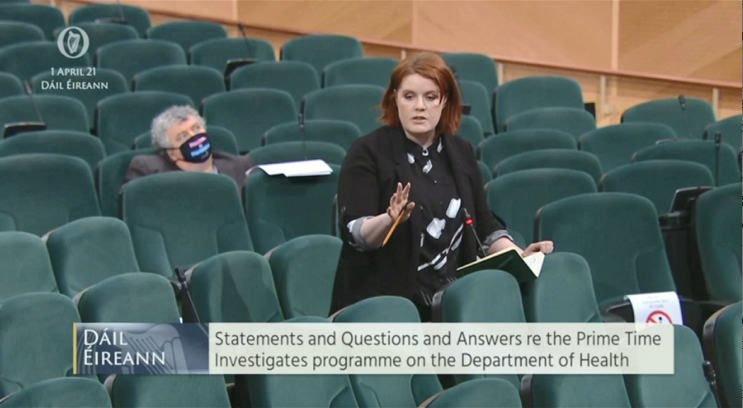 Transcript: Minister, I would like to echo what I think a lot of people have said today which is you strikes me as someone that is incredibly dedicated to providing suitable services for children with disability. I would like to acknowledge that from the outset. I think the enormity of what the RTÉ Investigates programme brought up was somewhat overshadowed by the Beacon Hospital issue last week but I expect we will still be talking about this long after that other issue is gone because this speaks to the culture and the ethics of Government Departments and in particularly Roinn Sláinte. It speaks to the treatment of the State of people’s personal data. And it also speaks to the attitude of Civil Servants to legal proceedings in relation to people who are resident in the State.

I heard your opening statement; I think the thing I would take issue with is the idea that this is normal practice. And I would hope this is not normal practice. I think during a legal proceeding it may be permissible to share information with co-defendants but what we are talking about here are dormant files dating back to 2007 where all of sudden in 2017 or 2018 people take it upon themselves to go and create a dossier related to those files and then perhaps reapproach families. And we know it is not normal because the Department took it upon themselves to compile a Senior Counsel’s report. So, the Department must recognise that it is not normal. RTÉ have recognised that it was not normal because they got a programme out of it. And the families that are flooding my inbox with questions around this are recognising that it is not normal because their reasonable expectation of privacy has been breached. And I have to say unlike some of the Members here today, I do not acccept that it was legal either because we have not seen the Senior Counsel’s report and I am not assured that the Senior Counsel would have been in possession of all the facts because those facts would have been provided to him by the Department itself.

And the questions I am getting in my inbox from families who are really quite distressed are things like what other cohorts of people does this relate to? Is it just children? Is it children with autism? Does it relate to mental illness? How many groups are dossiers being compiled on? Is it a constrained issue? How widespread is this? And what was the interaction between teacher, and GPs, and therapists, and speech and language therapists? Did anybody say no? What happened then? What is the interaction of Tusla here? Did they go and get legal advice? Can families of children on whom these dossiers were compiled who are now over eighteen and obviously there is a capacity issue then, can they go and access their files? And by the way I am actually not going to ask you those questions because I have no notion that you would be able to answer all of them because this dates back over a decade and this is about the operation and management by Civil Servants of the business of the Department.

I am going to end now but just to say we need to get it right this time. This is about the trust between the parents, of which I am one, of children with disabilities. And let not the message come from today that this is normal practice.